Skip to main content
ARE YOU A VENDOR?
Super June 2019 British Columbia

Tyanna, on July 11, 2018 at 13:52 Posted in Before the wedding 0 8
Saved
Reply
Hey everyone Im sorry this is going to be long, but I'm having a hard time trying to decide what to think about a message I got yesterday on Facebook from my photographer.

With our wedding package we received a free engagement session. We signed our contract with her in May and had tentatively booked a June session but hadn't picked a formal day.

She ended up moving back home from victoria that month, so messaged me saying it just wasnt a good time so we planned for August 16 to give her lots of time to get settled in back home. I managed to book the afternoon/evening off from both of my jobs and my FH booked the day/night off both his jobs too. We booked this on may 28 with her as a final date and yesterday I received this message from her. I get that its still a months notice, but we had to book that time off and now will have to request for more time off instead. Between my 2 jobs, I have to be able to find another day that works for both bosses, and so far that's looking like it won't be until September 20. Ince I get my days approved, my hubby can ask for his off and we can hope that it works.


We had picked a summertime shoot because our plan was to hike to a peak on one of our favourite parts of the SCT at sunset for our photos.

Now knowing that I cant do it until fall, that completely changes my plans and I'm a little bummed. I found out today that her brother bought them both tickets to Vegas and that's where she is going, which I totally get, but I think that maybe she could have handled it all a little better and even said what was actually going on.

I would have understood if she had at least said "hey my bro surprised me with a trip to Vegas but it's the same weekend as your shoot , can we reschedule?" Rather than just the "sorry I'm out of town" that I received.

I feel like because it's the free shoot that she doesnt really care, even though we just paid her nearly $1000 for our deposit for the wedding package.

Anyway, I think that maybe I just needed to vent and that maybe I'm out of line for feeling this way, but I needed to tell someone! 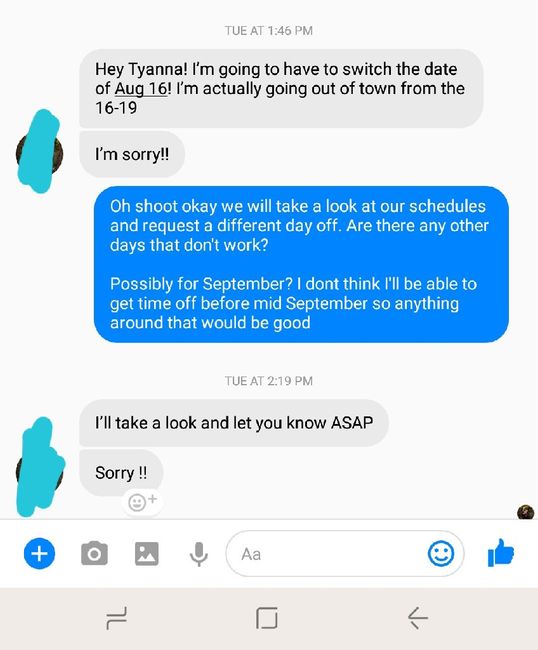